I am continuing our yearly tradition of looking back at what happened during the academic year. And it was quite the year, for many reasons.

If you are wondering why I’m writing this review instead of Zach Hamilton, it is because he graduated and now has a full-time job at NBC Sports Washington (just like Tyler, although they’re in different departments).

The year started quietly, with no sports in the Fall semester due to the COVID-19 pandemic. Then we received word that we would be returning to action, broadcasting both the Fall and Spring sports during the Spring semester, with Wrestling thrown on top for good measure. At one point, we were looking at over 90 broadcasts.

Ultimately, we did 75 broadcasts this year. The schedule was constantly in flux due to COVID-19 “pauses” where teams were unable to complete due to positive cases somewhere within their programs. Additionally, we saw a very cold February where we were unable to do any outdoor sports until near the end of the month (Women’s Soccer vs. Georgetown on February 25). Even then, we still completed more broadcasts this year compared to last.

We worked as hard as we could to keep our crew safe with masks, gloves and as much social distancing as we could manage in the cramped press boxes. To aid with social distancing, we had to find a way to have less people working inside the press box. In the end, we figured a way that the color commentator and replay operator could work remotely. This impressed several people, with our counterparts at George Washington University calling us and asking us how we pulled it off. 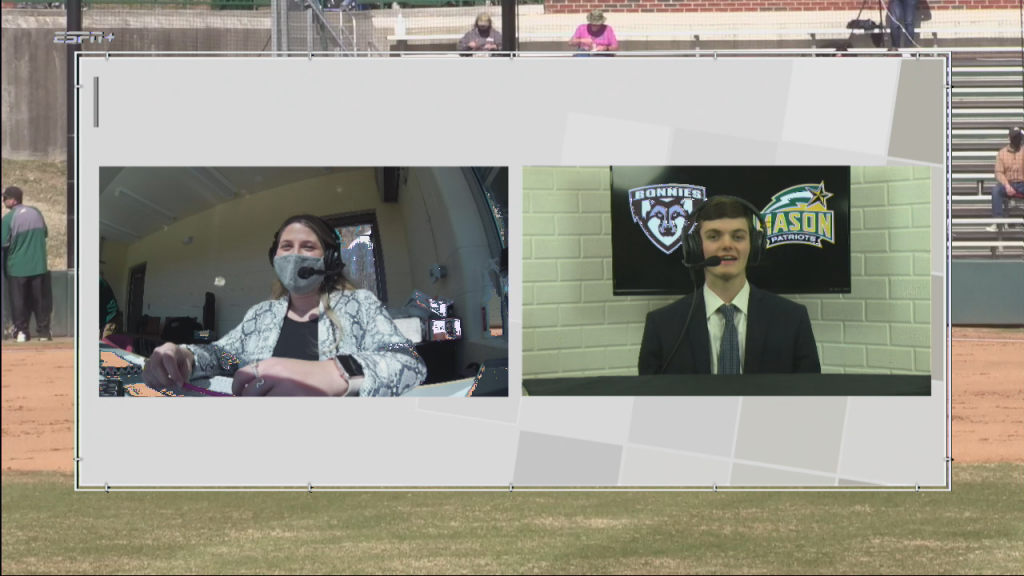 Sometimes people would work from home, sometimes they would work out of our office in The Hub. Since our video studio in The Hub wasn’t used by Mason Cable Network this year (MCN produced all of their shows remotely), we reconfigured it for color commentators. Future site of half-time shows …? 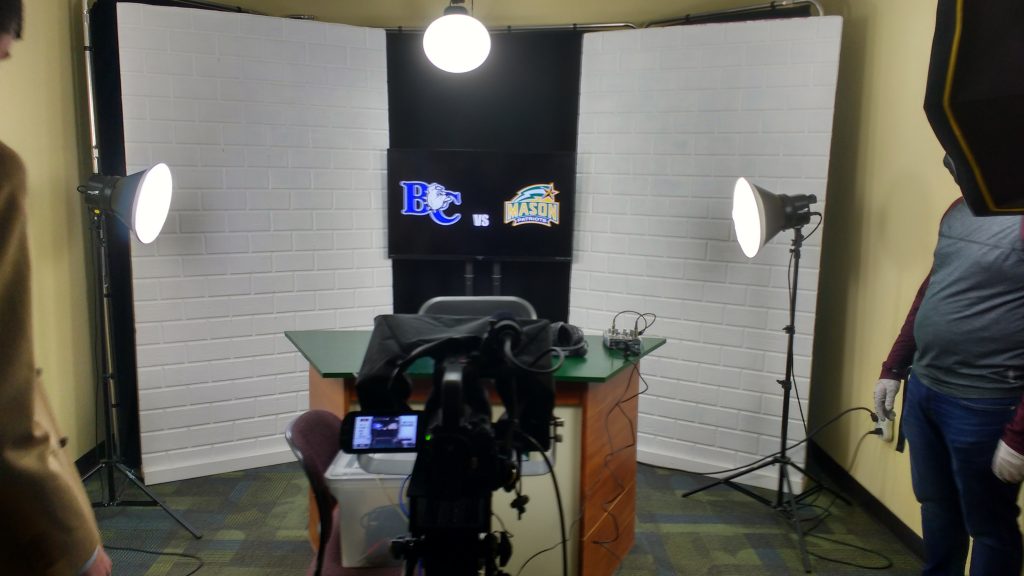 I am grateful that we managed to complete the year without any COVID-19 pauses of our own.

We also got the opportunity to try our hand at a couple of new sports. Up first was the A-10 Diving Championships on April 15 and 16. For some reason, the A-10 decided to separate swimming and diving at the last minute. The swimming events continued as planned at Spire Institute in Geneva, Ohio, but the diving events came to George Mason. This was our first ever broadcast from the Aquatic and Fitness Center, and I think we did a great job considering the short turnaround. I have to say that the pace of dives was a lot quicker than we expected. 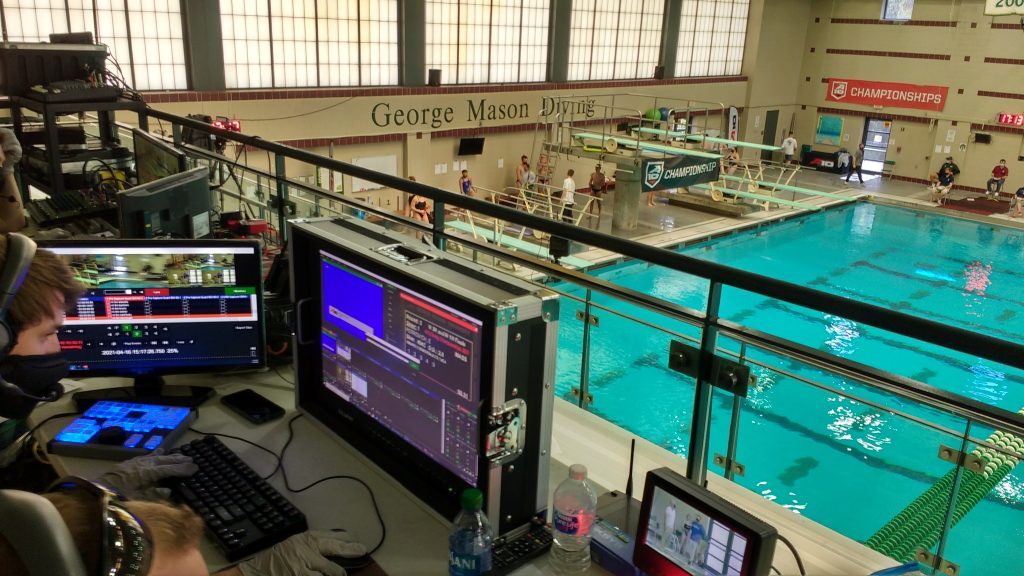 Next up was the A-10 Outdoor Track and Field Championships on May 1 and 2. Technically, this was the second track broadcast we did, with the first being in April 2018, which we did as part of Trent Lancaster’s senior project. Speaking of Trent Lancaster, he came back to help us with these broadcasts. Good thing too, since this was easily the most complex broadcasts we ever did.

Compared with our first broadcast, we covered every single track event and added all the field events.  This included the throwing field events across the street. It took pretty much every single piece of equipment we had to pull this off. It was so complex, that Zach Hamilton, Collin Teslez, Cruz Sanchez and myself had to go over a day earlier to run all the cabling. 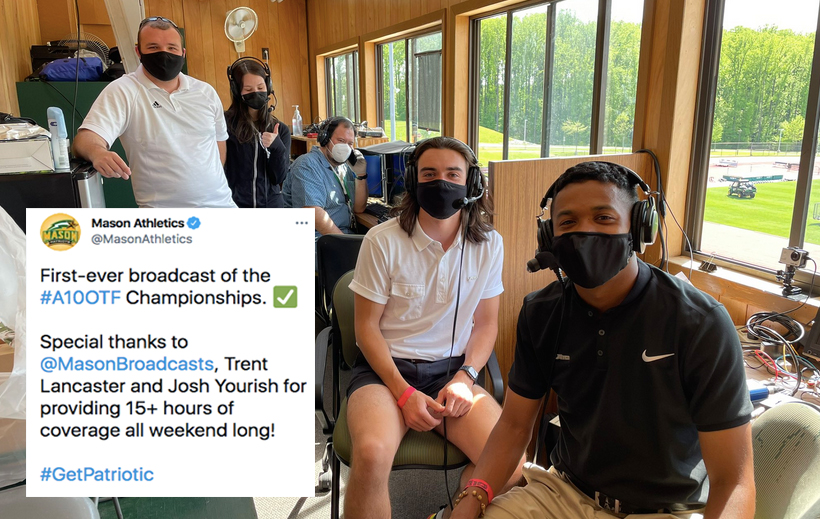 We finally added a remote-controlled “PTZ” outfield cam at Spuhler Field. After years of effort, we finally got it and it’s great! Not only is the quality better, but I don’t have to climb a ladder every game to mount a camera anymore. For some reason, I didn’t take a picture of the PTZ installed, but here’s a picture of the camera after I assembled and tested it. Thanks to everyone who made it happen, including Jay Marsh and Jeff O’Bier. 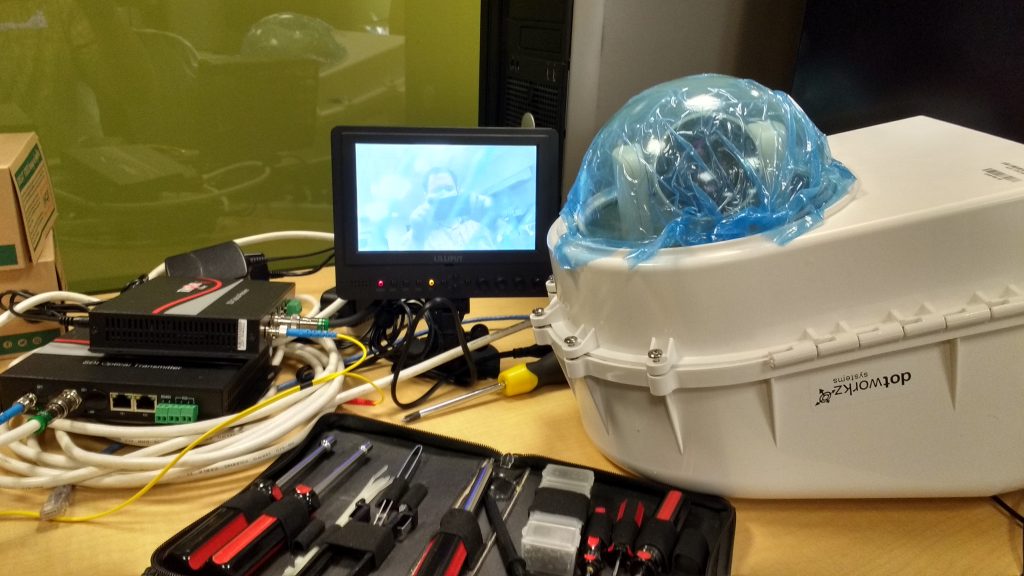 PTZ Camera on the “Test Bench”

The “Iron Man” of the year is Oscar Avelar, who did 39 broadcasts. Oscar also stepped in as broadcast director one particularly busy weekend when Zach, Collin and I were tied up. Honorary mention goes to Long Tran who did two less broadcasts than Oscar, but actually clocked more hours thanks to a lot of lengthy baseball broadcasts. 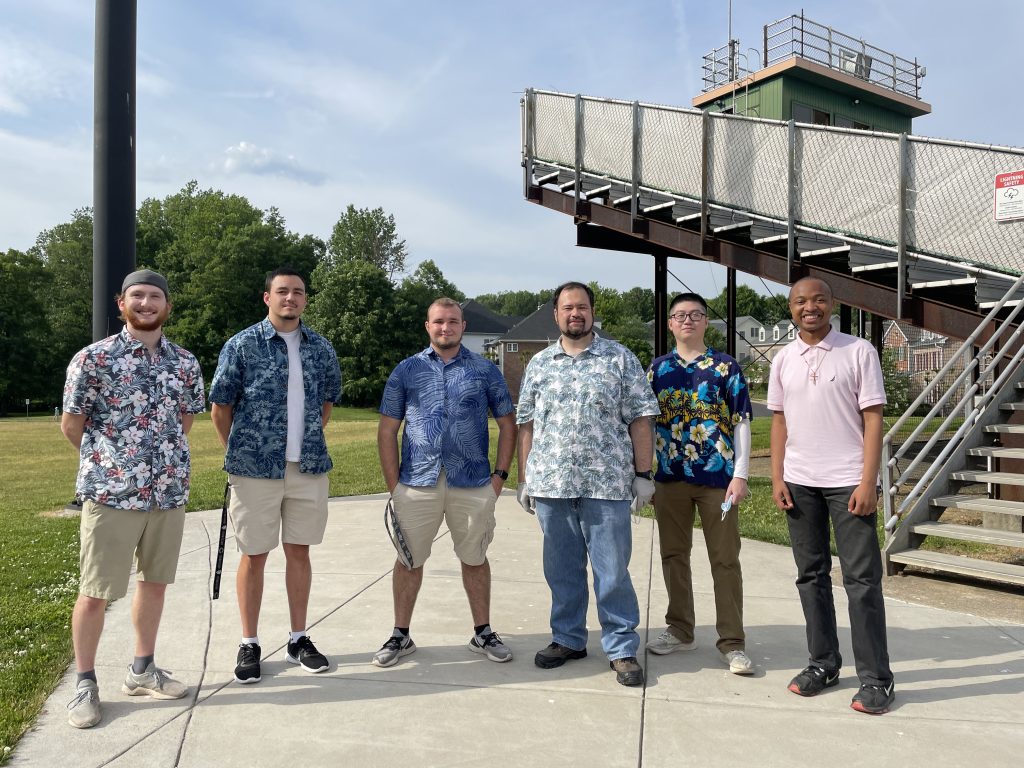